ATTENTION: Anyone who wants to stop making excuses and get more done...

"Finally! Discover How To Overcome Excuses and Beat Procrastination So You Can Finally Get Things Done!"

Many of us struggle with procrastination and excuses.

Whether we don’t feel good, we feel we are too busy, we are afraid of the work and success that comes with it, or are just constantly distracted by life itself, many of us aren’t as productive as we could be.

We fall back on excuses of why we aren’t achieving as much as we felt we should be.

Do These Excuses Sound Familiar?

Everyone has their own excuses of why they aren’t as productive as they feel they should be and why it takes them longer to complete projects and tasks than expected.

When people don’t want to tackle a task or a project, they make up an excuse of why they can’t do it at that time.

In other words, they procrastinate, always pushing something off until later that they could and should be doing now.

Then, when the deadline comes closer, they panic and start working faster and haphazardly in an effort to get the work done in time, often leading to critical mistakes in the work.

And the fact we aren’t as productive as we should be because of excuses and procrastination is a key reason why you aren’t having the success you thought you would.

We’re always falling behind on projects, struggling to complete them on time.

We always look as if we’re not capable when we struggle to complete projects on time, while others make it look so easy because they’re always on time or early when it comes to completing projects.

And, of course, those are the people who are always getting the promotion or the success you thought you would get.

How Do You Overcome Excuses?

So, how do YOU start getting the promotions and the success that you want and deserve?

The key is learning how to overcome excuses and procrastination and becoming more productive at work and in your life in general.  “How?” you ask.

Thankfully, I've written a step-by-step guide to show you how...

Let me introduce to you...

How To Stop Procrastinating And Get More Done While Staying Happy

This new 43-page manual has ten chapters of usable information to help you overcome excuses and procrastination, while helping you to become more productive and successful at work and in your life.

Here's exactly what you'll get inside the course: 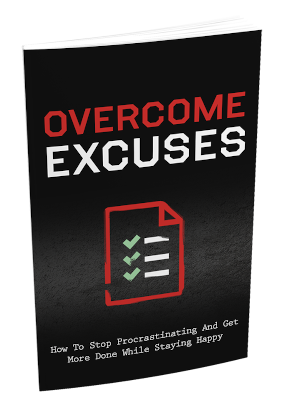 Here's what you'll discover in this guide: 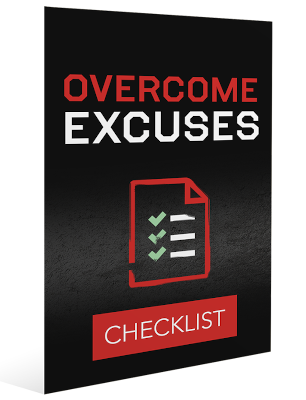 View or print this handy checklist so that you can check off each point.

It is like a summary of the entire guide but in actionable, bite-sized points so that you can successfully get through the course. 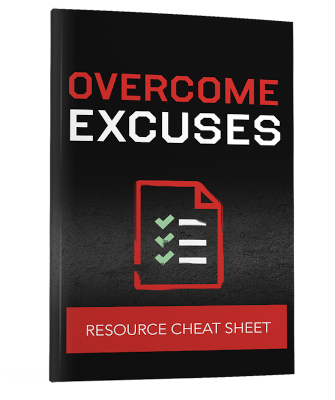 You'll also get access to a rolodex of top sites, blogs, forums, tools, apps and services to get you even further.

A quick glance over this mindmap and you'll get an instant refresher of all the major points and action steps from the main guide.

Does that sound good or what?

Are You Finally Ready To Stop Making Excuses?

You'll benefit so much by going through this course.

Here are just some of the benefits you'll gain:

"How Can I Use This Powerful Guide Right Now?"

You can own Overcome Excuses together with all the bonuses for a mere $7.00 .

That is a truly incredible deal!

Did I mention this eBook is only $7.00? It’s definitely a point worth repeating. You will be hard-pressed to find a more valuable resource.

I'm delighted to have the chance to share this powerful guide with you.

Again, you will receive the comprehensive and valuable insights for only $7.00 .

Yes! I want instant access to Overcome Excuses which includes the following:

P.S. - If you choose to bypass this offer, how is your life going to change?  Are you going to become more motivated to do better work in less time?  That’s unlikely without the information and resources in this offer.  Make the investment in yourself and in your loved ones to get this package now.

You’re not alone in dealing with excuses, procrastination, and loss of focus; the only question is whether you will take that step to improve your focus, become more productive, and benefit as a result?  Click here to get “Overcome Excuses: How To Stop Procrastinating And Get More Done While Staying Happy” now.